When Halifax man Brian Abram was paralysed after a cycling accident, his thoughts turned to helping his young grandson understand life in a wheelchair.

Brian, 62, who was injured in 2013 while training for a fundraising bike ride to Spain, was in a coma for several weeks and spent a year in hospital. He is completely paralysed from the waist down and will always be a full-time wheelchair user.

However, rather than dwell on his change of fortune, he turned his disability into a series of five hilarious, illustrated children’s books, published on November 1, 2019.

Written to show youngsters that being in a wheelchair doesn’t have to stop you having fun and enjoying life, Brian originally wrote his tales to help his young grandson, Charles, understand why Brian was in a wheelchair.

“I needn’t have worried,” said Brian. “Charles was only six months old when I had my accident, so he’s only ever known me in a wheelchair.  And, he just accepts it!”

Charles proved to be the inspiration for the stories Brian wrote to entertain him, and the young lad in ‘The Adventures of Grandad Wheels!’ dreams up all sorts of ways for his Grandad to enjoy adventures, even though he is a full-time wheelchair user.

In Brian’s first book, ‘Charlie’s Big Idea!’ , Grandad finds himself unintentionally joining in at the skateboard park. Another tale sees him propelled round the supermarket by a fire extinguisher his grandson attached to his wheelchair!

There are now five riotous stories written, with the possibility of more to come.

They have received high praise, with world famous illustrator Sir Quentin Blake saying: “It’s an impressive piece of work … I appreciated that Grandad was normal, and not the whiskered dotard that I would have been tempted to draw” 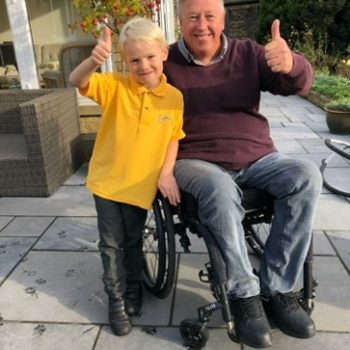 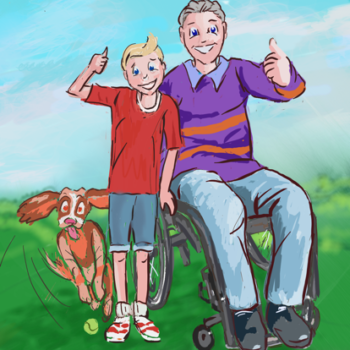 Brian hopes his stories will help children understand that people in wheelchairs are just like everyone else and can still achieve things and enjoy life, by getting them to laugh at the daft things this Grandad gets up to.  He plans to read them to children in primary schools and encourage discussion, in a fun way, about the issues surrounding being in a wheelchair.

Brian’s books can be purchased directly through his website, www.grandadwheels.com and they should be available through book shops very soon.  All proceeds from sale of his first book will be donated to the two charities that helped him so much with his recovery; Spinal Injuries Association and Back Up.

His first book is dedicated to all the staff at Pinderfields Spinal Unit, Wakefield who helped him recover.